There has been a craze for spy movies in Bollywood. These movies show the agents going to another country to carry out intelligence missions. Another spy movie ‘Code Name Tiranga’ has been released in theatres. So, does this spy movie once again manage to capture the pulse of the audience? Read more in this Code Name Tiranga Movie Review.

The movie’s story begins in Afghanistan, where RAW agent Durga Singh is working. One day she dramatically meets Mirza Ali, a doctor working for the United Nations. She falls in love with him and introduces herself as an Indian journalist named Ismat. Durga Singh is on a mission to eliminate Khalid Omar, who attacked the Indian Parliament. She traps Dr Mirza Ali in her love because Omar is about to attend a wedding in the area, and this doctor is on the guest list for the wedding reception.

At this party, the real identity of RAW agent Durga Singh is revealed. And sadly, Ali Mirza is killed at the hands of Khalid Omar. The story passes through several turns. Then the story reaches Turkey, where Durga is given another mission to kill RAW agent Ajay Bakshi, a RAW senior who is a traitor. There are many twists in the story. Now whether Durga will be able to catch Khalid Omar and kill Ajay Bakshi or not, you have to watch the movie to find out.

The movie is directed by Ribhu Dasgupta. Ribhu has also written the story for the movie, while the dialogues are by Shishir Sharma. The story written by him in this movie is awe-inspiring. But there are many shortcomings in the direction. Many such scenes in the movie have been extended forcefully, and watching them makes one feel bored. The length of the movie has also increased a bit.

There is neither patriotism nor any love story in this movie. The audience does not understand the motive behind keeping the Vande Mataram song in the background at the movie’s climax. Just one song cannot make it a patriotic movie. As a writer and director, Ribhu Dasgupta could not even develop the love story in the movie. The movie’s script is decent, but the direction does not seem up to the mark.

The beginning of the movie is engaging and entertaining. The first half hour of the movie is like classic spy movies. The movie’s first half hour is excellent in terms of writing and direction. But the story of the movie was missing some good plots later. The movie begins to struggle afterwards. Many mistakes in the story could have been avoided like the scene expansion technique could have been better. Also, some sequences seem completely unreasonable throughout the movie. Code Name Tiranga Movie Budget: Code Name Tiranga is produced with a total budget of 25 Crores (Source).

As far as acting is concerned, Parineeti Chopra has done well, not in acting but action. Priyanka Chopra’s cousin, Parineeti Chopra, who went from movie campaigner to actress, does not know how to act—despite this, taking her as RAW agent raises a question mark over the casting. She does not even fit the role of RAW agent. Also, she made no effort to mould herself according to this character from her side. Smoking a cigarette in tense scenes does not make the RAW agent look smart.

Hardy Sandhu looks good in the role of Mirza. He has done a great job, but his screen presence is short. He could not showcase his acting talent due to his minor role in the story and script. Sharad Kelkar has also done an excellent job. Rajit Kapoor and Divyendu Bhattacharya’s performance is just average. Like Hardy Sandhu and Sharad Kelkar, you can dare to watch this movie just because of the cast. Parineeti Chopra disappoints; she needs to learn more about acting.

There is something worth seeing in this movie; it is the location of the Middle Eastern countries. Cinematographer Tribhuvan Babu captured the locations so beautifully that one might think of travelling abroad. But the action scenes filmed on Parineeti Chopra look like video games. Good camera work and editing in the action scenes could have brought the movie to life.

The songs in the movie are relevant to the story but not very engaging. The movie has only two songs in total, which are romantic and dramatic. The music of the songs is average and directed by Gilad Benamram. On the other hand, the movie’s background music is excessively loud. The background music creates the perfect atmosphere, especially in the action scenes. 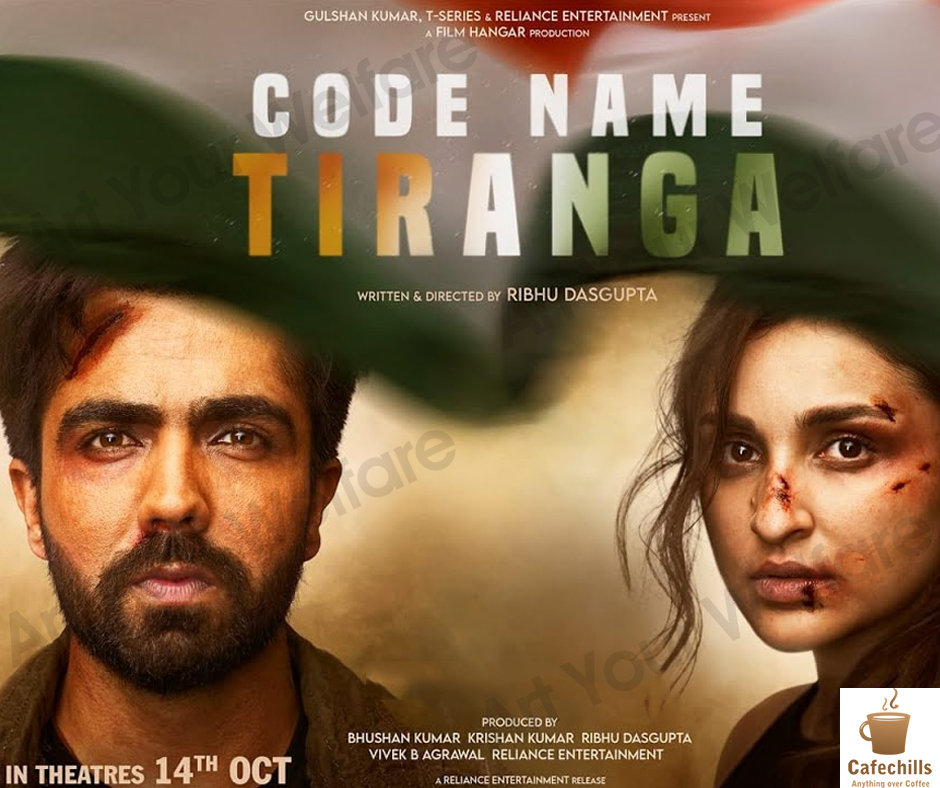 Code name Tiranga is a joke in the name of spy action thriller as there is nothing in the movie that makes this movie a must-watch. Parineeti is seen doing fantastic action scenes in the movie. Unfortunately, despite winning the audience’s hearts through the action sequences, the movie is defeated at the direction level.

An attempt has been made to make an impact only because of the action. But the dull script, boring songs, and poor acting ruined the movie. On the one hand, South Cinema and OTT are serving fresh and unique content. However, at the same time, Bollywood is still engaged in formula-based movies. Code Name Tiranga is not a great movie, but it should be appreciated for one thing; it fills the need for a spy movie in theatres. It may not be a great movie for everyone, but the main reason to watch this movie is that you will be able to see a spy movie in theatres once again. Code Name Tiranga Movie Release Date is 14 October 2022. If you like to watch spy movies, you can watch them once. Otherwise, it is better to save your money.