Maja Ma Movie Review – A unique story that shows a woman struggling with her identity despite a peaceful marriage.

Actress Madhuri Dixit’s movie ‘Maja Ma’ has been released on Amazon Prime Video’s streaming platform. The movie is pure entertainment and deals with the issue of sexual identity. Fans have been waiting for this movie for a long time, as Madhuri Dixit can be seen in it. Maja Ma Movie Release Date is October 6, 2022. If you plan to watch this movie, read the Maja Ma Movie review.

The movie revolves around Pallavi, a housewife in a traditional Gujarati family. Middle-aged Pallavi is famous among the locals for her beauty, gentle nature, and skill in dancing and cooking. Pallavi and her husband Manohar have a lot of respect in their society. Pallavi’s son, Tejas, is in love with a girl from a wealthy family in the USA as he also works in the USA. There is a condition that marriage will take place only after meeting the family members. Everything seemed fine until the rumor that Pallavi is a lesbian arises. Some of Pallavi’s conversations were recorded by a girl on a mobile phone and publicized. The talk reaches issues like lesbian and gay. After this, there are many twists in the story. Although the movie also deals with the crisis that comes during a marriage.

Sumit Bhateja has written Maja Ma’s story and screenplay. Anand Tiwari has directed it. First, the writer should be praised for choosing such a subject and fitting into a middle-class Indian family. The movie’s story is on a taboo subject, and the writer has written it equally smoothly and well. Some of its scenes and the dialogue between mother and daughter give you a shake.

At the same time, the director has not allowed the story to be weak in terms of direction. Director Anand Tiwari has presented things that could have gone wrong if not handled carefully. With a touch of humor, the movie moved in the right direction and did not lose the seriousness of the subject. The presentation is impressive, with Gujarati culture filling the screen. The director has presented a severe issue with simplicity in a family movie.

The screenplay of the movie is also wildly engaging and entertaining. The movie does a great job of mixing humor in some scenes. Viewers may not laugh out loud, but they will think deeply about the issues the movie addresses for young people. The dialogues, characters, and scenes are well written, which keeps the audience in shock most of the time.

Madhuri Dixit has easily played the role of Pallavi, which the movie needed. She is brilliant in the movie as a mother, wife, and role model for society. She quickly became the movie’s main attraction through the dance sequences. Gajraj Rao, Madhuri’s husband, also strengthens the movie. He delivers an impressive performance despite the character’s flawed and quirky writing. Every time he manages to settle in the audience’s mind by giving a solid performance. At the end of the movie, the role of Gajraj gives you the feeling of being a real man and a good husband.

Ritwik, who played Tejas, was another actor who led the performance. Ritwik has beautifully captured the character’s life, outlook, beliefs, and love on screen. Barkha Singh, who played Tejas’ love partner, did justice to her role. The Ritwik-Barkha chemistry in the backstory of the movie is also good. Srishti Srivastava, Sheeba Chadha, Rajit Kapoor, and others who were cast in the side roles got the space they deserved and managed to attract attention. Sheeba Chaddha and Raj Kapoor’s English accents are striking. They performed it excitingly. Each of the actors has fitted into their roles beautifully.

The movie has a great sense of cinematography, where all the scenes are perfectly shot. The frames are filled with beautiful backgrounds and dance scenes. The cinematography is good, although not significant enough to raise the level of enjoyment. 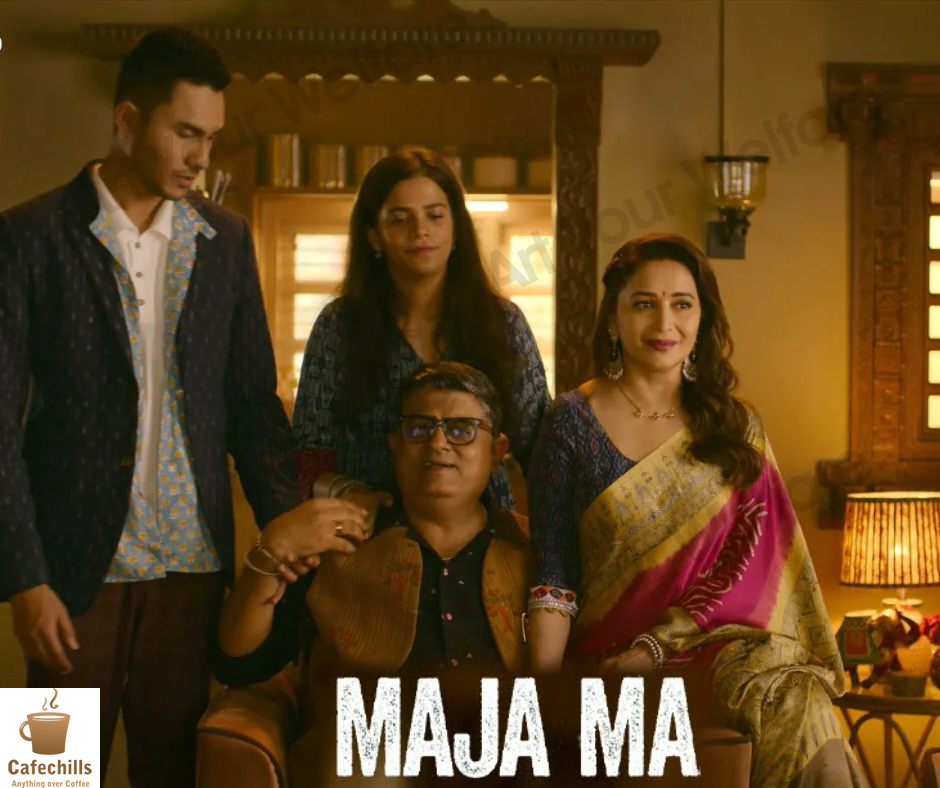 Many movies based on sexual identity have arrived in Bollywood, which boldly presents many topics that society hesitates to discuss. The makers deserve to be congratulated for their effort to make a movie on an issue that people shy away from talking about. Words like homosexual and gay have been used a lot in the movie. Apart from this, the movie also depicts the fabric of relationships. Such things are discussed in the movie that the modern generation needs to see.

Maja Ma is a movie with a unique story that ultimately shows a woman struggling with her identity despite a peaceful marriage. A light-hearted comedy can also be seen in the movie. The movie is entertaining with small humorous moments and can be watched without boredom. The movie has the potential to be overlooked once, and those who have time should watch it.

Madhuri Dixit fans can check out this movie. The actress played such a character for the first time in the movie. It is a light-hearted and short movie available on the OTT platform. Those people looking for emotions in a movie about homosexuality may also consider this. Even those who are fond of watching movies with good stories will not be disappointed either.