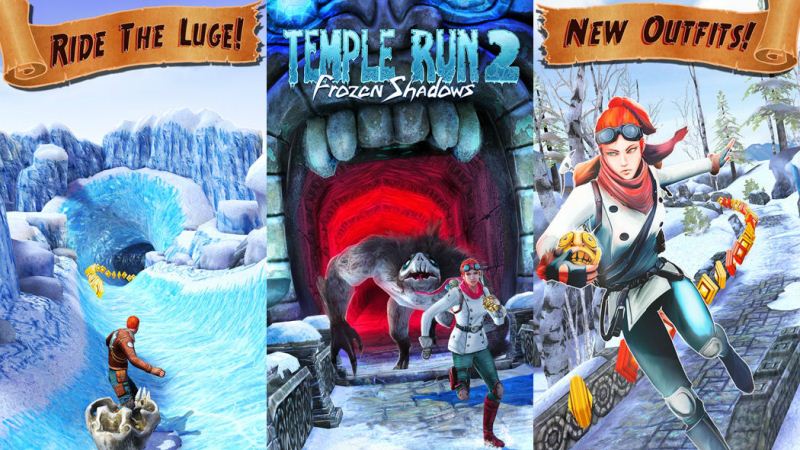 Temple Run 2 is a sequel to Temple Run which was downloaded by millions and took the world by storm!

Now get more of running, jumping, sliding, turning which you loved in the earlier game.

The most interesting thing about this sequel is that you can choose characters that have their own special abilities and you can master them as they get unlocked.

Graphics are much improved as compared to the old Temple Run. Everything so clear and stunning with vibrant colors. Fire, water, wood, ice – all look so realistic. The sky is beautiful and lovely. Different Maps are available to play. There are lot of obstacles in this game as compared to the previous game which makes it more challenging.

Certain minecarts are available in the game which can be controlled by tilting the device. The faster you run, the faster the game moves. Reflexes are lightning fast – be it jump, swipe or slide.

Tracks are a bit narrow in this game though it is really enjoyable. Heavy graphics does not slow down the game. Reflexes are pretty fast.

A lot more gold coins are available all over the track. Collecting them helps players to buy characters and abilities in the store.

Abilities are same like in last game: Shield, Coin Bonus, Boost, Score Bonus, Coin Magnet and Gem Bonus. Sometimes gems are also found on the track which can be spent as an instant lifesaver or to buy Power up upgrades. However Power up upgrades last only for one round.

Special Achievements can be earned during the game play. Objectives of the game vary in type and difficulty though rewards are significant. As players fulfill their objectives, XP is earned. Once XP bar is filled, a level is up which unlocks new abilities or rewards.

Temple Run 2 is much better than the original one. Greater variation in environment at higher speeds, different maps, characters with special abilities make this game a fun to play and more challenging to play for all age groups.