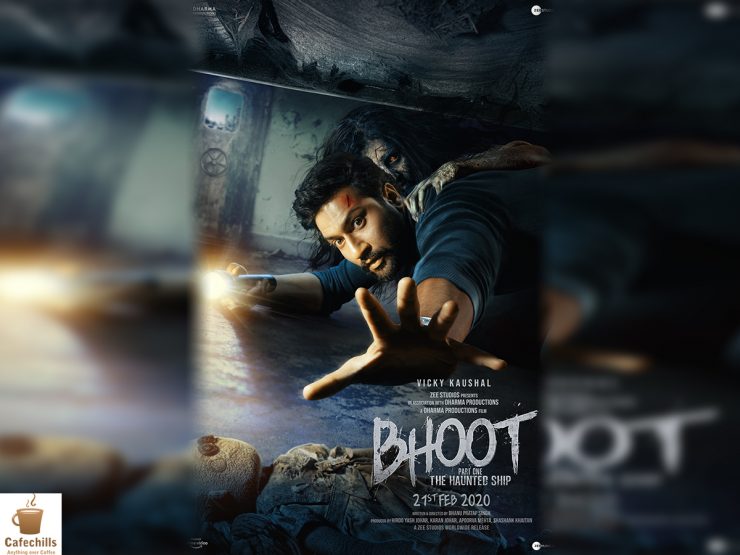 Bhoot Part 1 – The Haunted Ship is directed by Bhanu Pratap Singh and produced by Karan Johar.

The movie starts with an incident of a cargo ship stranded at juhu beach in Mumbai. Two shipping officers Prithvi and Riyaz get very interested in it. There is no soul aboard in the ship but there might be a ‘bhoot’. Interesting thing is how two themes are running parallel – psychological thriller and supernatural thriller. The movie questions about who is haunted – ship or Prithvi. Prithvi had a deep moaning,he had tremendous personal loss as he lost his wife and daughter. Here the story raises a question about whatever is happening aboard are all Prithvi’s illusions or are real. The movie revolves around the same and spins a story about why it’s haunted.

VICKY KAUSHAL delivers a powerful performance but the whole story gets absurd so he has to carry the sunken story line to the end. Other co-stars have done a fair bit of work but don’t expect much from BHUMI PEDNEKAR, as she is up there only for a cameo which is forgettable too in the end. There is not much to speak about ASHUTOSH RANA as the story doesn’t offer him much still he is appreciable.

So the film offers a naturally flowing storyline with great camera skills. Climax scene is not predictable unlike the typical bollywood films. You should pay a visit to the theatre if you are a lover of horror stories.