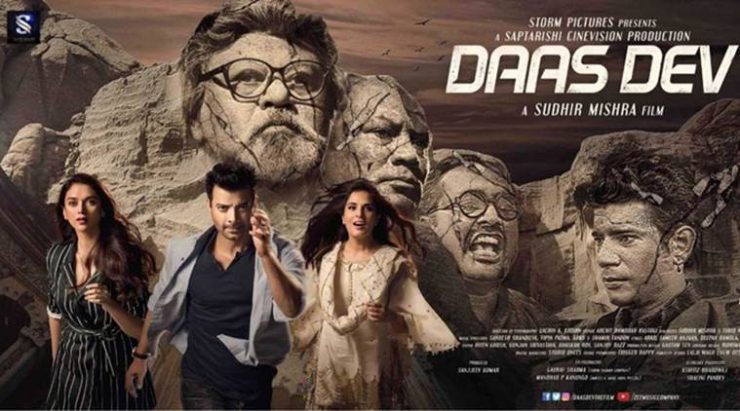 Daas Dev is based on the Bengali novel written by Sarat Chandra Chattopadhyay “Devdas” and also Shakespeare’s “Hamlet”.

Vishambar Singh (Anurag Kashyap) is a politician of U.P. He accidently dies in a plane crash after his rally leaving his son (Rahul Bhatt) and wife behind. His younger brother Saurabh Shukla wants Rahul to join politics as his feels his end is near.

Paro (Richa Chadha) is a smart and intelligent girl who loves Dev but gets trapped in political conspiracies. Her whole life changes when her father gets murdered.

Chandni (Aditi Rao Hydari) is kept by SK (Dilip Tahil) a well wisher of the family to look after Dev. She wants only Dev and plays all politics to win Dev.

Situations arise in such a way that Dev abandons Paro and faces her on the political front. Love story, politics, thriller and a mix of Shakespeare’s power are mixed in this movie.

What happens when all get to know the killer of Vishambar Singh?

Rahul Bhatt has worked hard for his character, an alcoholic and a druggie even before tragedy happwns. Richa Chadha’s acting skills are really good. Aditi Rao Hydari fails to impress through her sensual moves and her prime narration.

Political world is highlighted throughout the movie. How greedy businessmen become corrupt and poor farmers can’t do anything. Backstabbing, sending goons, lies – movie drags to a very predictable ending. Climax of Daas Dev isn’t interesting or thrilling. Things are not well balanced, so don’t expect much from the film which has a historic title.

The writing of the script is half-baked and not that convincing enough. The lead cast have put their worst foot forward here. Too much cluttering of characters and plots – none of them are satisfactorily resolved. The movie has not lived up to its famous inspirations.