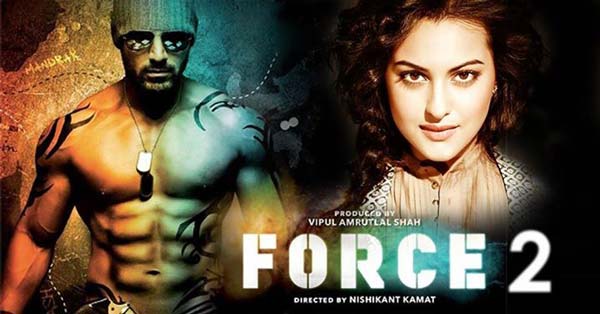 This movie is the sequel to Force movie. John Abrabham returns as a tough cop in this movie.

Mumbai Police offer, ACP Yashvardhan (John Abraham) receives a courier which is sent by his friend in RAW (Reseach and Analysis Wing). It is actually a code which is the beginning of a high profile case and takes Yash to Budapest. Agent KK aka Kanwaljeet Kaur (Sonakshi Sinha) is his mission partner and boss.

Inspector Yash realises that the friend who sent him the code was betrayed by someone from the agency. Yash offers his services to RAW to avenge his friend’s death and to stop other RAW agents from getting eliminated.

Inspector Yash discovers that Rudra Pratap Singh alias Shiv Sharma (Tahir Raj Bhasin) who is a low-level employee of Indian Embassy of Budapest is leaking details of undercover RAW agents and is a big criminal. Now Shiv is set to destroy RAW and Inspector Yash and Agent KK have to stop his endeavour.

John Abraham is really impressive in his intense role and action sequences be it lifting cars or breaking jaws.

Tahir Raj Bhasin is good and shows his vunerable side though he disappoints as an antagonist.

Sonakshi Sinha is natural as agent KK. Her chemistry is perfect with Yash and they make a perfect pair to bond over investigation.

Music is average, tracks like O Janiya and Ishaara are likeable.

A must watch for John and Sonakshi fans. A decent movie with great action scenes.