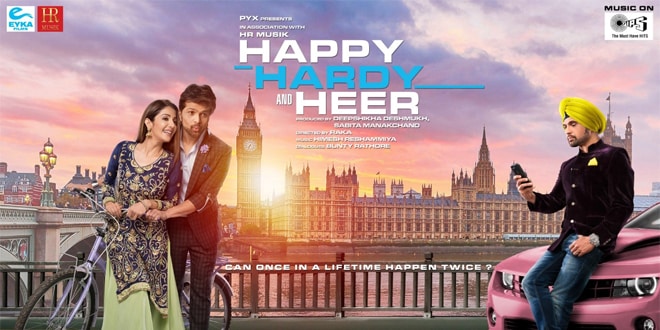 In this movie, Happy (Himesh Reshammiya) and Heer (Sonia Mann) grew up as best friends, Happy falls in love with Heer but she moves to London for getting a job there. Happy loves Heer since childhood but one day Happy realizes that she loves someone else.

Himesh Reshammiya will be seen in a double role in this movie. In this movie, Himesh has played both the roles himself, now it will be very exciting to see who that girl chooses, basically the movie is a love triangle. According to the filmmakers this is the most musical movie of the year.

In this movie Punjabi actress Sonia Maan is looking good with Himesh Reshammiya. The title of this movie was first Jat Baat Juliette after the name was changed and kept Happy Hardy and Heer. The rest of the story will be known only after watching the full movie. Punjabi actress Sonia Mann is looking suits the character of the lady in this movie. Himesh’s acting in this film is better than the previous movies. The songs in this movie are very well-liked by the audience. Let’s see how much Happy Hardy and Heer will be liked by it’s viewers.