Monica O My Darling Movie 2022 – An entertaining and suspense thriller which keeps the audience glued to their seats till the very end.

Monica O My Darling Movie 2022: The Indian film industry has now reached an era in which the movie’s plot and execution are given greater importance than its celebrity cast. In such a scenario, if a movie’s subject, its treatment, and its star cast are all effective, the product will undoubtedly be superior. Monica O My Darling Movie Netflix release is a prime illustration of this trend. In response to the enthusiasm around this movie over the previous several days, we have provided our readers with a review.

Its story has been created around the empire of a robotic company. At the story’s beginning, a person working in a company kills another employee through a robot machine. In this way, the movie starts with a murder scene. However, the mystery is not created here as this murderer is initially visible to the audience. The actual murder mystery begins with the plot of the murder of Monica, i.e., the lead character. Monica is a woman who works in this office and takes money from everyone by trapping them in love.

Her latest victim is Jayant, the company’s most promising employee. He has risen from a small town to get admission to IIT and become a significant company shareholder. Both the owner of the company and his daughter Nikki are impressed by Jayant’s ability, and soon Jayant and Nikki are going to get married. But now Jayant has fallen into the trap of Monica, who starts blackmailing him for money. From here, the real adventure begins in the story, which goes more profound with the suspense of serial murder.

Whereas before Jayant can think of any other way out, Nishikant Adhikari, the son of the company’s owner, suggests a plan to get rid of Monica, who is trapped in Monica’s trap. Coming out of the straits of middle-class life, Jayant reaches a unique position in the company and gets involved in the plan of Monica’s murder due to the fear of losing everything. He gets the responsibility of disposing of Monica’s dead body and does it too. But after doing everything according to planning, when he reaches the office meeting the next day, Monica comes back alive in front of him there.

At the same time, ACP Naidu, who is investigating this murder mystery, adds humour to the story and her presence. On the other hand, the story opens with layer after layer of secrets, one end of which also connects to the murder in the beginning. In the end, the way ACP Naidu closes this case of murder mystery, the audience is shocked. Overall, the story is full of adventure, and the movie makers have left no stone unturned to present it excitingly.

Regarding the movie’s direction, Vasan Bala has taken his story forward by giving space to each character very well. Sometimes you get goosebumps while watching the movie, and sometimes you cannot live without laughing at the comedy scenes. Here all the characters are as dark as they look perfectly in comic timing. It will be said of Vasan’s direction that he presents the movie in a very high-profile manner on a meager budget.

Every corner has the hallmark of Vasan Bala’s direction. He has excellently nailed the suspense in the movie. Curiosity surrounds one scene after another. Despite having all the characters and backstories, the director did not allow the movie to wander from its intended path. Vasan has succeeded in presenting the plot of the movie and the murder mystery in a humorous manner. He weaves the story so quickly that there is no time to blink.

It is a matter of movie review, so it is also necessary to mention the movie’s shortcomings. If you fall into the trap of logic, then you may get confused after watching the movie. What if it happened? How did it happen, and it cannot happen? So please enjoy it without getting bogged down in logic. Leaving aside the reason, it keeps you hooked from beginning to end. It is purely an entertaining movie full of suspense and thrill.

The star cast of the movie is so strong that everyone is seen towering over each other. Rajkummar Rao, Huma Qureshi, and Akanksha Ranjan are the story’s main characters, and all of them have given excellent performances. Along with this, there are many minor characters in the movie. Sikandar Kher makes a short but enjoyable inning as the son of the company’s owner. Monica O My Darling Movie Release Date is November 11, 2022.

On the other hand, in the character of Sunkat, Goyal keeps your eye on him in every scene because if you lose your sight, then who knows, he may play some game again. The character of Bagavathi Perumal also becomes an integral part of this murder mystery. Radhika Apte makes a strong entry in the movie’s second half in the role of ACP Naidu. Unfortunately, Zayn Marie Khan’s performance is average on the part of Rajkummar Rao’s sister.

The movie’s name is based on a cabaret retro song, ‘Monica O My Darling,’ but the name sounds perfect when the songs are revealed one by one. All the songs are fantastic, and music director Achint Thakkar reminds us of the retro era of Bollywood. But, unfortunately, the camera work of the movie is average. There are some excellent shots but also some average ones. The cinematography of Monica O My Darling’s Movie 2022 is done by Swapnil S. Sonawane. 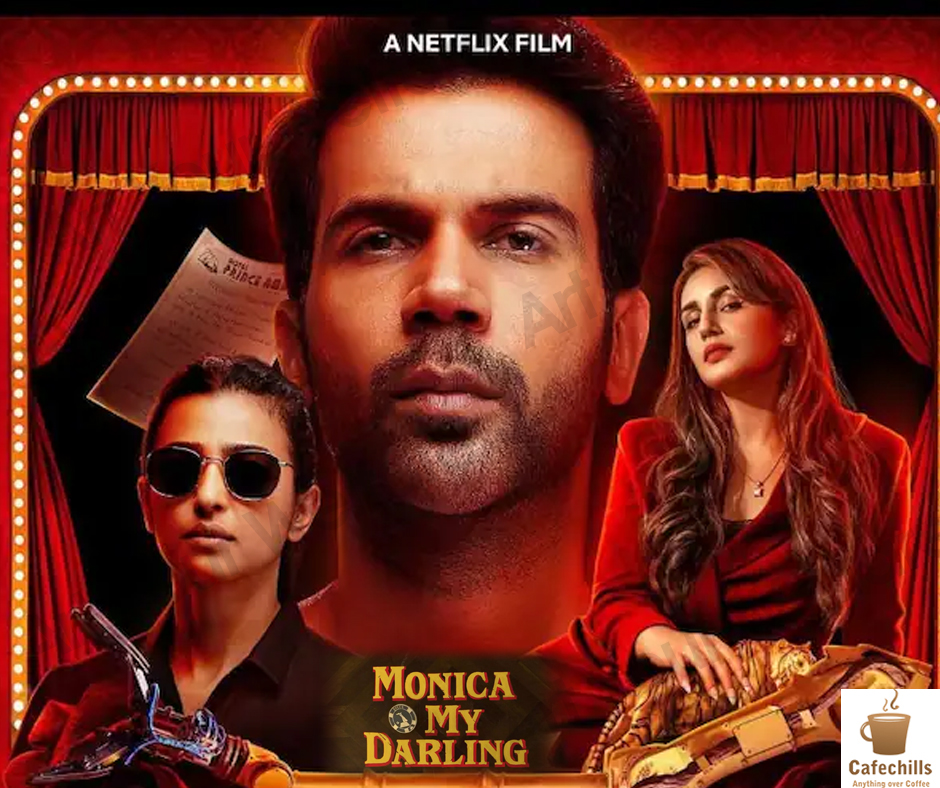 Monica O My Darling is an entertaining movie full of suspense and thrill. At least it is not like those suspense thriller movies of today, whose fun gets gritty in the end after the uncertainty opens. However, there is another solid side to the movie. Its background music and songs are fresh. If you want to experience a murder mystery, intrigue, and suspense, then do watch this movie on Netflix.