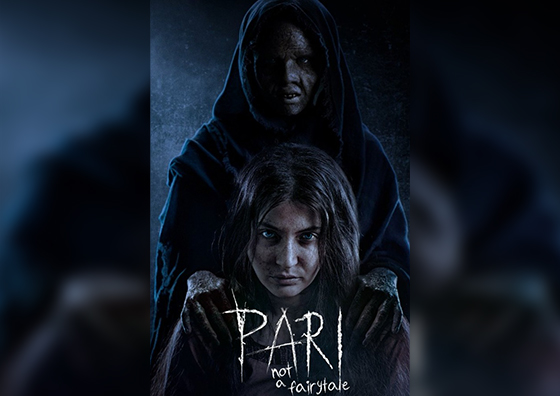 Anushka has come back with a movie which is not a fairytale. It is a horror flick. After playing sweet ghost in Phillauri, time to play the scary ghost.

The movie starts with a sweet guy Arunabh (Parambrata Chatterjee) who meets a girl for arrange marriage. Piyali (Ritabhari Chakraborty) seems just fine for Arunabh. A car is seen moving through jungle and its raining cats and dogs. Suddenly a loud noise and the car stops with a screeching halt. Surely someone has hit the car, hope it is a human. Pranab comes out of the car and they realise they have hit a gypsy woman whose life can’t even be imagined.

Interestingly, Arunabh lands up meeting Rukhsana (Anushka Sharma) who is chained in some abandoned house. Is Rukhsana evil or supernatural or good? Things are not so good between Arunabh and Piyali after Rukhsana’s entry into Arunabh life.

Professor Khasim Ali (Rajat Kapoor) playing a very complicated character makes his entry in the movie. Just cannot predict what he is upto? A bangladeshi professor who drives evil spirits but why is he after Rukhsana? Is there a connection?

The love track between Anushka and Parambrata is good though it keeps fluctuating. Spooky scenes, eerie sounds do really scare a lot but not all the time. The story keeps shifting from Bangladesh to Kolkata in its flashback but it is kept simple.

Anushka Sharma’s performance is excellent in the movie. Beautiful and horrific at the same time, her facial expressions – all fit well according to her character. Parambrata Chatterjee has a good presence. His unusual chemistry with Anushka works well in the movie. Ghost busting professor with one eye, Rajat Kapoor does a good job and no doubt is a legend in the making. The background music goes well with the script of the movie be it thumping of doors, spine-chilling effects or nail cutter effect.