After a long wait, the movie Thank God has been released in theatres. This movie gives the message of putting humanity first. The occasion of Diwali has always been special for Bollywood. It would be correct to say that ‘Thank God’ is a Diwali gift for the audience. Fans have been waiting for this movie for a long time, as comedy and fantasy can be seen in it. If you plan to watch this movie, then definitely read this Thank God Movie Review.

The movie’s story revolves around Ayan Kapoor, a real estate broker. A businessman who is in debt and earns black money. He suffers greatly from demonetization and is now trying to sell his house. However, he does not even give time to his wife and daughter. Finally, his business comes to a standstill, and the house is sold. Meanwhile, Ayan Kapoor meets with an accident, after which he is stuck between life and death.is injured body is in the hospital. But, on the other hand, his spirit has reached up. Where Chitragupta, who keeps an account of man’s deeds, plays a game with him. In the game, there is talk about the sins and goodness done by Ayan on earth. But the game’s condition is that he will get a new life if his good deeds are high. On the other hand, he will die and go to hell if there are more sins. What will happen now? Will Ayan return to earth alive? What lessons will he get in this game? All these questions form the crux of this movie. Thank God Movie Budget is around 50 crore Rupees.

In some places, the movie is full of WhatsApp university quotes trying to guide your life. The touch of Vedic scriptures is also missing in the movie. There is no strong philosophy about death and morality throughout the movie. The makers of Bollywood think that the intellectual level of the Hindi audience is very low, but they need to change their mindset.

After understanding the matter in the first half hour, the audience waits for the movie to end. The story repeatedly goes back and forth in flashbacks to show the account of deeds. This movie is like a roller coaster ride that will make you laugh and cry. The climax of the movie is full of emotions. Overall, ‘Thank God’ is a pure family entertainer movie.

If we talk about the actors’ acting in the movie, Ajay Devgan has done a good job. Sidharth Malhotra has also done a great job, and his performance is quite balanced in the movie. The chemistry between Sidharth Malhotra and Rakul Preet Singh looks good; the audience gives them much love. Nora Fatehi also appears as the main attraction in the movie.

Be it a comedy or a serious character, Ajay Devgan easily gets into the character. Here as a CG (ChitraGupt), he suits the personality of a harsh deity. Sidharth Malhotra has tried to imbibe his selfish and egotistical nature. However, sometimes he seems to need to catch the right expressions. There is no strong scene in Rakul’s part in the role of a police officer. The work of the rest of the cast of the movie is mediocre.

The song and music of the movie are very average. The Hindi version of the superhit song Manike Mage Hithe will also be seen. Sri Lankan singer Yohani sings the song. This is the first time Yohani has sung her song in Hindi.

The background music in the movie is romantic, soulful, and melodious, enhancing the story. The music at the beginning of the movie adds a bit of life to the movie and the comedy. The camera work of the movie is also excellent. Aseem Bajaj does the cinematography of this movie. 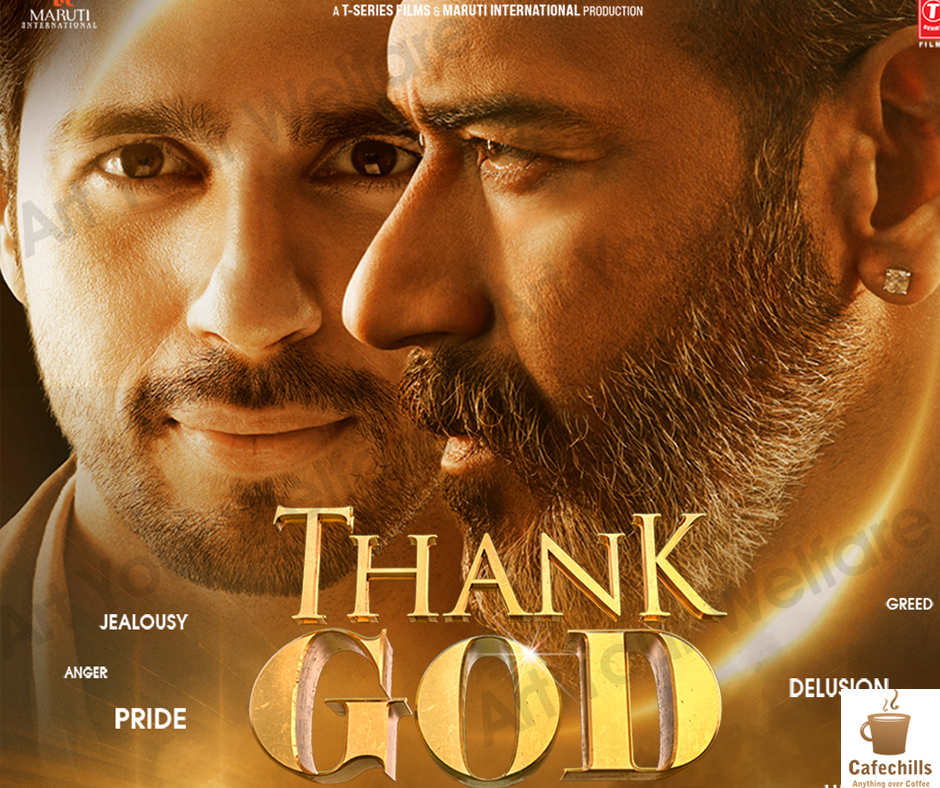 Thank God is a comedy-packed mass entertainer that delivers laughs and a beautiful message that will raise awareness in the audience. The message given by Chitragupta is the actual message of the movie that people believe in God. However, they do not believe in God’s message. They are trapped in lust, anger, attachment, greed, and ego. It is a must-watch movie as it has decent humour, lessons to learn, and is full of emotions.

Dozens of movies have been made on this subject. But once again, a filmmaker has tried to say something with his style. Thank God is a comedy movie which you will love watching. It has been shown in the movie that whenever a person gets a chance, he should do good deeds. After watching this movie, you are thinking about life may change. So, you can watch this movie alone or with your family.

Everything is good in the movie, from dialogue to acting. Most people have jealousy, anger, pride, lust, and confusion in their minds, but people keep trying to prove their evils as good. This is what the movie tries to show. This is an average Bollywood movie, which can be enjoyed with the family during this festive season.