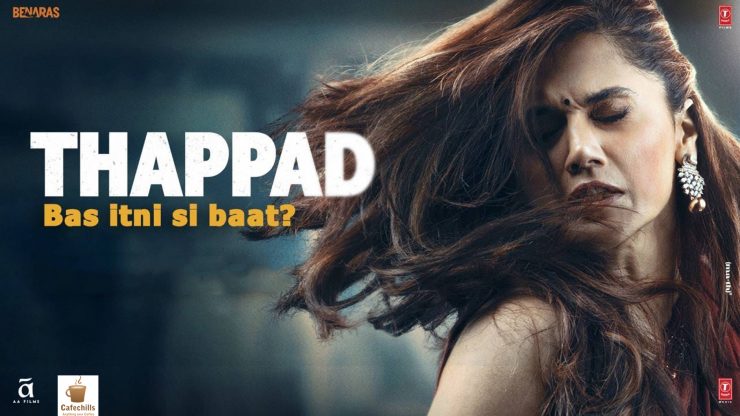 Anubhav Sinha’s Thappad is a truly groundbreaking and seminal film which is as relevant to this date as it would be 100’s of years ago. The movie clearly shows how the indian patriarchy acts when a mirror is shown to them. The realism which was suppressed is beautifully picturised.

The movie naturally shows the journey of an ideal wife to self respected women. This is a meaningful film with a strong and powerful message that it is not right to raise your hand on a women even if it is for the first time or whatsoever. Taapsee played the role of Amrita. Amrita had a fixed daily routine. She wakes up early in the morning and gets busy in the daily chores. She helps her mother in law at cooking. And these are repeated many times in the movie to portray that this is her daily routine. Meanwhile in a party her husband slaps her. ‘PAR EK HI TOH THAPPAD THA, SHAADI MEIN ITNA COMPROMISE TOH CHALTA HAI NA’ – everyone says the same thing and everyone moves on till they realise that Amrita has refused to move on. This is a story of a women who says enough is enough, ‘EK THAPPAD HI SAHI PAR VO NAHI MAAR SAKTA’. Then you realise the movie is not just about one ‘Thappad’, it’s something more than that.

Taapsee is just extraordinary as she melts into her role. Amrita is not a strong, powerful character which is beautifully portrayed by Taapsee. Pavail Gulati had a tough role but he is superb in his task. All other co-stars have done a brilliant job and you would fall in love with them.

It is a type of movie which stays with you even after it is over. This movie does what powerful cinema does. It asks you questions and keeps you entertaining throughout the show. The film deserves utmost respect for exploring a topic that was much needed . Overall a complete worth watch in the cinemas and has a take away message that is very very important.