The movie ‘Vikram Vedha’ starring Hrithik Roshan and Saif Ali Khan, was keenly anticipated by fans. In the middle of a massive Bollywood Boycott campaign, the movie was finally released in theatres, ending their long wait. This movie is a remake of the 2017 Tamil movie with the same name. If you intend to watch this movie, you should read this Vikram Vedha Movie Review.

Lucknow, Uttar Pradesh, inspires the movie’s plot. Vikram, an encounter specialist, is assigned to combat the city’s rising crime rate. The entire police force is searching for the notorious criminal Vedha. He operates out of Lucknow and is notorious for perpetrating multiple daylight killings. The day the authorities organise a covert operation to catch Vedha, he surrenders at the police station.

After this, the tale begins, altering the moral outlook of Police Inspector Vikram. The plot focuses on the search for answers to the questions concealed inside these stories. These tales are not only connected to Vedha but also contain numerous plot twists. For example, is the police inspector considering Vedha to be the story’s antagonist, or is someone else the story’s antagonist? For this, you must watch the movie.

Vikram Vedha is a remake of a south Indian movie helmed by Pushkar and Gayatri. It is a difficult undertaking to design a remake according to the intended audience while retaining the movie’s original spirit. In such a case, the story remains unchanged, but many dramatic elements have been added for the Hindi audience. Additionally, the delivery of certain scenes from the original movie is stylish.

Several flaws do not mar the movie’s direction. It is simply that the movie has become too long; it could have been shortened by five minutes, from twenty to twenty-five. Moreover, even after watching the movie, the answers to a few queries appear insufficient. After Hrithik enters the plot, the pace quickens. The story is set in Uttar Pradesh, and the characters’ native accents have added to the quality of the script.

Since there have been ongoing complaints about the lack of heroism in Hindi movies, Vikram Vedha has filled that hole for the Hindi-speaking public. The hero’s entrance is depicted in multiple slow-motion shots from various perspectives. The audience applauds and whistles as he obliterates his foes with a single punch. Vikram Vedha is a true example of a multi-starrer mass entertainment movie.

Hrithik Roshan has provided the best performance of his career in acting. His manner and drama show that he can imbue a character with a distinct identity. Only a small amount of overacting can be discerned in his performance; he has embodied every aspect of the essence. In the movie, Saif Ali Khan is seen flaunting his toned physique, and his acting ability is without reproach. Additionally, he has left his mark on the screen.

The performances of Hrithik Roshan and Saif Ali Khan in the movie Vikram Vedha are outstanding. Both receive equal scene time and bring forth the best in one another. Likewise, Sharib Hashmi has performed admirably in a supporting role. He is undoubtedly a wonderful actor, yet he has portrayed a different character in the movie. The remaining cast members have done their roles justice, including Radhika Apte, Satyadeep Mishra, Rohit Saraf, and Yogita Bihani.

Those who have seen the Tamil version of “Vikram Vedha” can compare it to its Hindi counterpart. In the Hindi movie Vikram Vedha, the romance between Yogita Bihani and Rohit Saraf appears tedious. To appease Hrithik Roshan’s admirers, the moviemakers have unnecessarily lengthened the movie. In addition, Radhika Apte’s character has nothing to do with the movie. However, she may have been a formidable figure in the movie.

Sam CS’s song catches the attention of the public. There are just two songs used in the movie. The movie’s soundtrack is acceptable. However, the movie’s theme music is memorable even after leaving the theatre. The music was composed based on the plot of the movie.

Simultaneously, the movie was moved to Lucknow, and very few movies have caught the city so wonderfully. Cinematographer PS Vinod has performed admirably. Slow-motion action sequences set to ancient melodies give the movie a new atmosphere. This encounter can be described as extraordinary. Additionally, the action sequences are shot effectively. 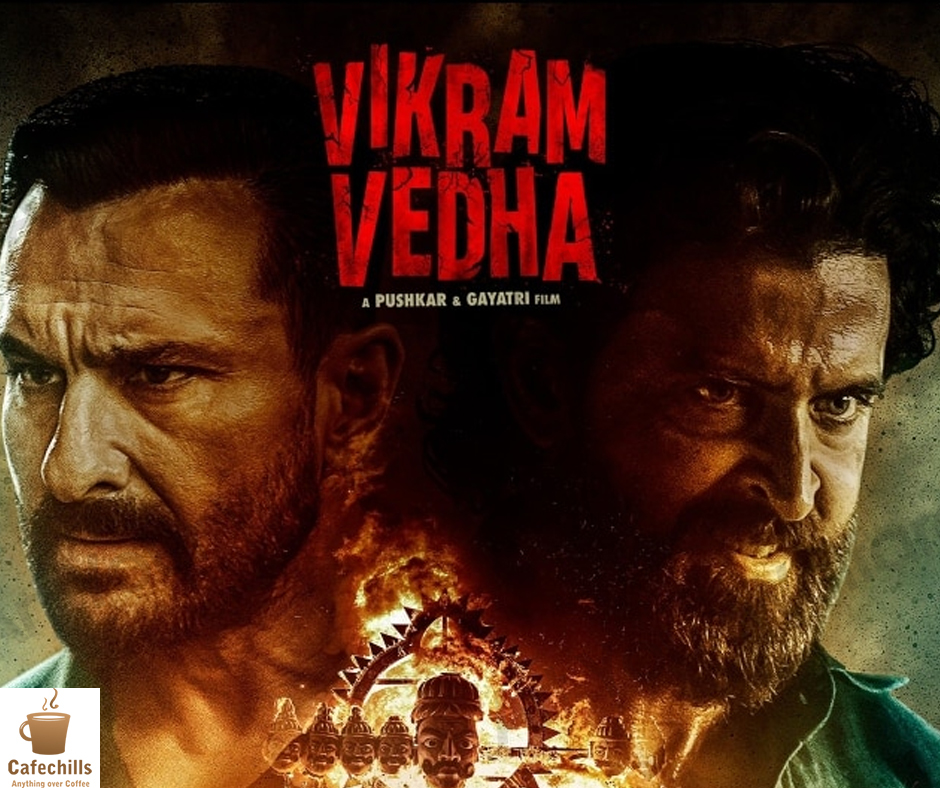 A movie like Vikram Vedha, packed with action and adventure, is sufficient to maintain audience interest. However, considering the Boycott campaign, their fate would resemble many recent Bollywood disaster movies. Nevertheless, the movie appears to be a box office smash after viewing its preview screening and observing the audience and critics’ good reactions. The acting of Hrithik Roshan and Saif Ali Khan set the movie on fire.

This action-drama movie takes you on a journey filled with unexpected turns. It raises numerous concerns about truth and deception. If you have not seen the original Vikram Vedha, you are in for a treat with this twist-filled remake. Even if you have watched the original, this movie is still entertaining. Except for a few screenplay errors, the movie is worth viewing. If you go to the theatre to watch a very good movie, this is that movie.